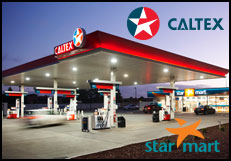 SPEND AT MYER TO GO INTO THE DRAW TO WIN $5,000 WORTH OF CALTEX STARCASH

TERMS AND CONDITIONS
1. Information on how to enter and prize details form part of these Terms and Conditions. If there is any conflict between these Terms and Conditions and any other published material, these Terms and Conditions will prevail.
2. The promoter is Caltex Australia Petroleum Pty Ltd, 2 Market Street Sydney NSW 2000 , The agent is Pinpoint Marketing Pty Ltd of Level 3, 34 James Craig Drive, Rozelle, NSW 2039 and will act on behalf of Caltex Australia Petroleum Pty Ltd, ABN17000032128–Phone: 1300 658 716
3. The Promotion opens at 12:01am am AEST on 26 August 2014 and the Promotion closes at 11:59pm AEST on 30 September 2014 (“Promotional Period”). There will be one (1) prize draw on 31 October 2014. If there is a need to conduct a second draw, because for example the winner cannot be contacted, see below. Entry is open to Australian residents over the age of 18 that reside within NSW, VIC, QLD, SA, ACT, NT, TAS and WA and who are registered members of the MYER one program , hold a MYER one card and fulfil the participation requirements see myerone.com.au
4. Customers in this Promotion are deemed to abide by these Terms and Conditions by virtue of their entry.
5. Customers consent to the Promoter using the Customer’s name, likeness, image and/or voice in the event he or she is a winner (including photograph, film and/or recording of same) in any media for an unlimited period without remuneration for the purpose of promoting this competition (including any outcome), and promoting any products manufactured, distributed and/or supplied by the Promoter.
6. Customers are eligible for entry into the Promotion when transacting in store at Myer between 26 August and 30 September 2014. One (1) transaction will translate to one (1) entry. Qualifying entry only valid when using MYER one card at time of purchase during the promotional period.7The prize draw will take place at the premises of Pinpoint Pty Ltd Level 3, 34 James Craig Drive, Rozelle NSW 2039 on behalf of Caltex Sydney at 2pm AEST on the 31 October 2014. The winner will be notified by telephone and in writing by 16 November 2014.If the prize is won by a secondary card holder the prize will be awarded to the Primary card holder. The Promoter’s decision is final and no correspondence will be entered into.
7. The name of competition winner will be announced in The Australian publication on 17 December 2014.
8. The Promoter may conduct such further draws at the premises of Pinpoint Pty Ltd Level 3, 34 James Craig Drive, Rozelle NSW 2039 on behalf of Caltex at 2pm AEST on the 30 January 2015 (or such earlier date approved by the gaming authorities) as are necessary for an unclaimed prize, The winner awarded as a result of an unclaimed prize first draw will be notified by phone and in writing by 15 February 2015.
9. The name of any winner arising from the unclaimed prize draw will be announced in The Australian on 30 March 2015 .
10. There will be one (1) prize of $5,000 in Caltex StarCash. Total prize value $5,000.
11. If this promotion is interfered with in any way or is not capable of being conducted as reasonably anticipated due to any reason beyond the reasonable control of the Promoter, the Promoter reserves the right, in its sole discretion, to the fullest extent permitted by law (a) to disqualify any Customer; or (b) subject to any written directions from a regulatory authority, to modify, suspend, terminate or cancel the Promotion, as appropriate.
12. It is a condition of accepting the Prize that the winner may be required to sign a release of liability in a form to be determined in the absolute discretion of the Promoter.
13. Except for any liability that cannot be excluded by law, the Promoter Caltex Australia Petroleum Pty Ltd and agent Pinpoint Marketing (including their respective officers, employees and agents) exclude all liability (including negligence), for any personal injury; or any loss or damage (including loss of opportunity); whether direct, indirect, special or consequential, arising in any way out of the Promotion, including, but not limited to, where arising out of the following: (a) any technical difficulties or equipment malfunction (whether or not under the Promoter’s control); (b) any theft, unauthorised access or third party interference; (c) any entry or prize claim that is late, lost, altered, damaged or misdirected (whether or not after their receipt by the Promoter) due to any reason beyond the reasonable control of the Promoter; (d) any variation in prize value to that stated in these Terms and Conditions; (e) any tax liability incurred by a winner or Customer; or (f) use of the prize.
14. The Promoter collects personal information in order to conduct the Promotion and may, for this purpose, disclose such information to third parties, including but not limited to agents, contractors, service providers, prize suppliers and, as required, to Australian regulatory authorities. Entry is conditional on providing this information. Customers should direct any request to access, update or correct information to the Promoter. All entries become the property of the Promoter.
Authorised under Permit numbers: NSW LTPS/14/05751; ACT TP14/02506; SA Licence No:
T14/1332

View All Competitions From myeroneaffiliates.com.au