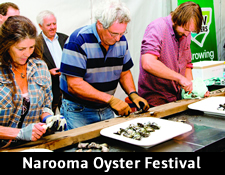 Win a weekend away at the Narooma Oyster Festival

1.The following terms and conditions apply to the “Win a weekend away at the Narooma Oyster Festival Competition” and by submitting an entry to the Competition entrants warrant that they have read, understand and agree to be bound by these terms and conditions.
2.The competition runs from 1 December 2013 to 12 March 2014.
3.This is a game of chance. The prize is valued at up to $600 and consists of a family pass (two adults and two children) to the festival’s Natural Gourmet Fair on Saturday 5 April, and overnight accommodation, dinner and breakfast at the Whale Motor Inn and Restaurant for two adults and two children on Saturday 5 April.
4.Entrants must be 18 years and over. Entries must be sent to ActewAGL Marketing PO Box 250 Canberra 2608 or submitted online at actewagl.com.au/essentials by 5.00pm on 12 March 2014.
5.The winner will be announced by 3.00pm on 14 March 2014 at ActewAGL House, 40 Bunda Street, Canberra ACT 2600 and contacted by telephone and confirmed in writing.
6.In the event of an unclaimed prize, that winner’s entry will be deemed invalid and the Promoter reserves the right to distribute the Prize to the next best valid entry. In these circumstances, a redraw will take place two weeks after the initial draw on 26 March 2014 at 3.00pm at ActewAGL House, 40 Bunda Street Canberra City ACT 2600 and will be contacted by telephone and confirmed in writing via email.
7.ActewAGL may require the winner to provide identification as required by ActewAGL including (without limitation) proof of identity, proof of age and proof of residency. Identification considered suitable for verification is at ActewAGL’s discretion and may include suitable photo identification.
8.The Prize is not redeemable for cash or other goods and services and must be taken, as is, by the winner.
9.ActewAGL is not responsible for arranging or paying for any additional or ancillary costs associated with the Prize.
10.ActewAGL accepts no liability or responsibility in the event the Prize is unavailable or cancelled for any reason whatsoever. ActewAGL reserves the right to substitute an alternative Prize of similar value subject to the approval of the relevant authorities in each state and territory where required.
11.ActewAGL is not liable for any loss suffered or sustained in connection with the Prize, except for liability which cannot be excluded by law.
12.ActewAGL accepts no responsibility for any late, lost or misdirected entries including but not limited to entries not received by ActewAGL due to technical disruptions, network congestion or any other reason.
13.If for any reason any aspect of this Competition is not capable of running as planned, including by reason of computer virus, communications network failure, bugs, tampering, unauthorised intervention, fraud, technical failure, or any other reason beyond the control of the Promoter, the Promoter may in its sole discretion, cancel, terminate, modify or suspend the Competition or invalidate any affected entries. This is subject to the approval of the relevant authorities in each state and territory where required.
14.ActewAGL may in its sole discretion, disqualify all entries from, and prohibit further participation in the Competition by any person who tampers with or benefits from any tampering with the entry process or with the operation of the Competition or aids in violation of these terms and conditions, acts in a disruptive manner or acts with the intent to annoy, abuse, threaten or harass any other person.
15.By participating in the Competition, each entrant acknowledges that a further primary purpose for collection of entrants’ personal information by ActewAGL is to enable ActewAGL to use the information to assist ActewAGL in providing the Prize and to contact entrants in the future with information on special offers or provide entrants with marketing materials via any medium including mail, telephone and commercial electronic messages, (SMS (Short Message Service), MMS (Multimedia Message Service), IM (Instant Messaging) and email) or any other form of electronic, emerging, digital or conventional communications channel whether existing now or in the future. ActewAGL may share information with its related bodies corporate who may contact entrants with special offers in this way. By entering the promotion, each entrant agrees that ActewAGL may use entrants’ personal information in this manner. Each entrant also agrees that ActewAGL may publish or cause to be published the winners name and locality in any media as required under the relevant legislation. All personal information will be stored at the office of ActewAGL.
16.Any personal information collected will be treated in accordance with the ActewAGL Privacy Policy available at actewagl.com.au.
17.Without limiting any other clause, ActewAGL may amend any aspect of the Competition or any of these terms and conditions subject to applicable laws and the approval of the relevant authorities.
18.The Promoter accepts no responsibility for any tax implications that may arise from the Prize winnings.
19.Entries not fully complying with these terms and conditions of entry may be deemed invalid at the Promoter’s discretion.
20.All amounts include GST unless otherwise stated.
21.Employees and their immediate families of ActewAGL and its partners, ACTEW Corporation, AGL Energy, Jemena, and their related companies and their immediate families, are ineligible to enter the Competition.
22.The promoter is ActewAGL Retail ABN 46 221 314 841, a partnership of AGL ACT Retail Investments Pty Ltd ABN 53 093 631 586 and ACTEW Retail Ltd ABN 23 074 371 207 (‘Promoter’).
23.Authorised under ACT permit number TP13/04152 NSW permit number LTPS/13/08964.

View All Competitions From www.actewagl.com.au