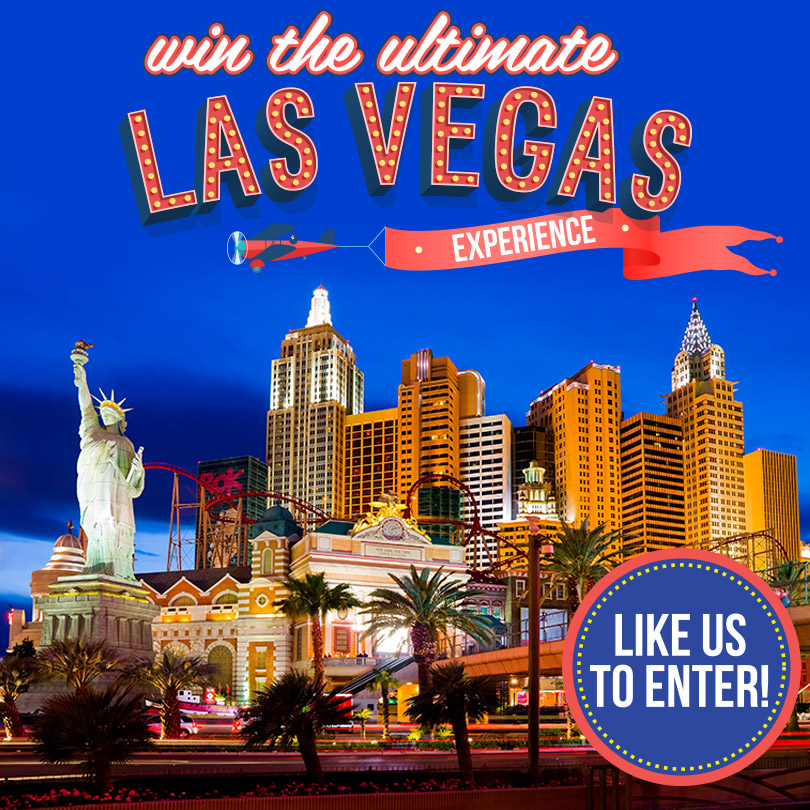 WIN A TRIP TO LAS VEGAS!

Play AT’s exciting new Facebook game for your chance to WIN the ‘Ultimate Las Vegas Experience’ including return flights to Las Vegas x2, accommodation at a top hotel x2 for 3 nights, dinner and a show x2, and an American Tourister APPLITE!

3. Employees (and their immediate families) of the Promoter and agencies associated with this promotion are ineligible to enter. Immediate family means any of the following: spouse, ex-spouse, de-facto spouse, child or step-child (whether natural or by adoption), parent, step-parent, grandparent, step-grandparent, uncle, aunt, niece, nephew, brother, sister, step-brother, step-sister or 1st cousin.

5. To enter, individuals must complete the following steps during the Promotional Period:

i. visit the American Tourister Australia & New Zealand Facebook Page (http://www.facebook.com/AmericanTouristerAustraliaNZ);
ii. become a fan of the American Tourister Australia & New Zealand Facebook Page by clicking the ‘like’ button (if not an existing fan of the Page);
iii. click the competition application on the American Tourister Australia & New Zealand Facebook Page;
iv. Entrants are required to match eight Las Vegas related pictures to win the ‘Ultimate Las Vegas Experience’. Entrants will have 60sec to match all the pictures. As this is a Game of Chance, all entrants will be entered into the draw regardless of how many successful matches are made within 60sec.
v. Complete the entry form including their first and surname, valid email address and valid best contact phone number
vi. Submit the fully completed form.

7. All valid entries received will be entered into the final draw.

i. The draw will take place at (on behalf of American Tourister Australia and New Zealand) Samsonite Australia, 5 Anzed Court Mulgrave 3170 Victoria on Monday April 14th 2014 at 11.59am AEST.

iii. If a Winner is not contactable or a Prize is not claimed by a Winner within 3 months, the Prize will be forfeited and a redraw will take place on 14th July 2014, at the same time and place as the original draw, subject to any directions from a regulatory authority. The winner(s), if any, will be notified by telephone and in writing.

8. The Winner of the Competition will win ‘The Ultimate Las Vegas Experience’ consisting of 2 x return flights to Las Vegas, accommodation at a top hotel x 2 for 3 nights, dinner and a show x 2, and 1 x American Tourister APPLITE 82cm Spinner. There will be two secondary/ runner up prizes of 2 x American Tourister APPLITE 82cm Spinner. The total value of all prizes will be $5,000.

9. The Promoter’s decision is final and no correspondence will be entered into.

10. The Promoter reserves the right, at any time, to verify the validity of entries and entrants (including an entrant’s identity and place of residence) and to disqualify any entrant who submits an entry that is not in accordance with these Terms and Conditions or who tampers with the entry process. Errors and omissions may be accepted at the Promoter’s discretion. Failure by the Promoter to enforce any of its rights at any stage does not constitute a waiver of those rights.

11. Incomplete or indecipherable entries will be deemed invalid.

13. In the event of war, terrorism, state of emergency or disaster, the Promoter reserves the right to cancel, terminate, modify or suspend the promotion or suspend or modify a prize, subject to any written directions from a relevant regulatory authority.

15. If any prize (or part of any prize) is unavailable, the Promoter, in its discretion, reserves the right to substitute the prize (or that part of the prize) with a prize to the equal value and/or specification, subject to any written directions from a regulatory authority.

17. Prizes, or any unused portion of a prize, are not transferable or exchangeable and cannot be taken as cash, unless otherwise specified.

18. Entrants consent to the Promoter using their name, likeness, image and/or voice in the event they are a winner (including photograph, film and/or recording of the same) in any media for an unlimited period without remuneration for the purpose of promoting this promotion (including any outcome), and promoting any products manufactured, distributed and/or supplied by the Promoter.

19. If this promotion is interfered with in any way or is not capable of being conducted as reasonably anticipated due to any reason beyond the reasonable control of the Promoter, including but not limited to technical difficulties, unauthorised intervention or fraud, the Promoter reserves the right, in its sole discretion, to the fullest extent permitted by law (a) to disqualify any entrant; or (b) subject to any written directions from a regulatory authority, to modify, suspend, terminate or cancel the promotion, as appropriate.

20. Any cost associated with accessing the Facebook Page is the entrant’s responsibility and is dependent on the Internet service provider used.

21. The use of any automated entry software or any other mechanical or electronic means that allows an entrant to automatically enter repeatedly is prohibited and will render all entries submitted by that entrant invalid.

22. Nothing in these Terms and Conditions limits, excludes or modifies or purports to limit, exclude or modify the statutory consumer guarantees as provided under the Competition and Consumer Act, as well as any other implied warranties under the ASIC Act or similar consumer protection laws in the States and Territories of Australia and New Zealand (“Non-Excludable Guarantees”). Except for any liability that cannot by law be excluded, including the Non-Excludable Guarantees, the Promoter (including its respective officers, employees and agents) excludes all liability (including negligence), for any personal injury; or any loss or damage (including loss of opportunity); whether direct, indirect, special or consequential, arising in any way out of the promotion.

23. Except for any liability that cannot by law be excluded, including the Non-Excludable Guarantees, the Promoter (including its respective officers, employees and agents) is not responsible for and excludes all liability (including negligence), for any personal injury; or any loss or damage (including loss of opportunity); whether direct, indirect, special or consequential, arising in any way out of: (a) any technical difficulties or equipment malfunction (whether or not under the Promoter’s control); (b) any theft, unauthorised access or third party interference; (c) any entry or prize claim that is late, lost, altered, damaged or misdirected (whether or not after their receipt by the Promoter) due to any reason beyond the reasonable control of the Promoter; (d) any variation in prize value to that stated in these Terms and Conditions; (e) any tax liability incurred by a winner or entrant; or (f) use of a prize and/or participation in any holiday prize.

24. As a condition of accepting a prize, each winner (and his/her/their companion, if applicable) must sign any legal documentation as and in the form required by the Promoter and/or prize suppliers in their absolute discretion, including but not limited to a legal release and indemnity form.