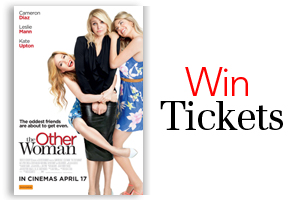 inmycommunity Win tickets to The Other Woman

Thanks to 20th Century Fox you can win one of 20 double in-season passes to THE OTHER WOMAN. On 17th April, 20th Century Fox will release THE OTHER WOMAN , the ultimate Girls Night Out comedy starring Cameron Diaz, Leslie Mann and Kate Upton. Carly (played by Diaz) is a hot shot New York lawyer who has it all, including a hot new boyfriend. She accidentally discovers however that her boyfriend is married to Kate (played by Mann). Carly and Kate decide to unite together to get even. They soon realize that he is also cheating on both of them with another woman, Amber (played by Upton). The three women all come together to get even and become best friends in the process.

View All Competitions From www.inmycommunity.com.au