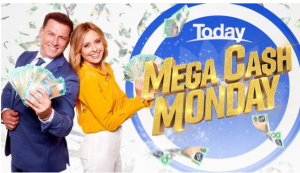 Eligible entrants
Permanent residents of Australia who are not ineligible to enter the Promotion under clause 2 of the Terms and Conditions.
(Entrants)

To enter:
SMS: Entrants can text their full name, code word and full address including suburb, state and postcode to 199 55 901. Entrants only need to submit a phone number that they can be contacted on if it differs from the mobile phone used to send the SMS to register. SMS entry cost per message within 160 characters is $0.55 including GST. Messages exceeding 160 characters may be charged extra. Premium SMS Service Provider is Ansible Pty Ltd. Helpline number 1300 914 815. NOTE: by entering the promotion via SMS an entrant consents to the Promoter using their personal details for the purposes of sending one (1) mobile terminated (MT) reply message which includes a confirmation of their entry in the promotion.

The above listed entry mechanics, (SMS, Smartphone Transaction) are only available to entrants with a compatible mobile phone connected to a service provider that permits these premium rate services. It is recommended that entrants check with their individual service provider in this regard.

To be a valid Winner, each Entrant who receives a call during a live broadcast of The Today Show above must comply with the following requirements:

Table A
(a) The Entrant must answer their call within three (3) full rings.
(b) Upon answering the call, the Entrant must state “I wake up with Today” (or any alternative phrase as deemed suitable by the Promoter in its absolute discretion).
(c) The Entrant must answer the phone live when called. No recording devices including, but not limited to, answering machines will be accepted.
Number of Winners
7
Winner Notification
Winners will be notified immediately via telephone in accordance with the process set out in ‘winner determination’ and confirmed in writing within two (2) business days and their names will be published in The Australian on the respective date specified in Table A above.

Prize/s
AUD$50,000
Total Prize Pool
AUD$350,000
Prize Supplier/s
N/A
Winner Publication
Table A
Unclaimed Prize Date
15/06/2020 at 09:00 am AEST at Ansible, Level 3, 100 Chalmers Street, Surry Hills NSW 2010.
Unclaimed Prize Winner Notification
Winners, if any, will be contacted in writing within two (2) business days of the draw.
Unclaimed Prize Winner Publication
Winner names will be published in The Australian on 22/06/2020.
Special Conditions
Cash calls are made in Sydney time.
For Draw Periods 1 – 6 inclusive, the Promoter will randomly draw one (1) Entrant from all valid entries registered in the relevant Draw Period. For Draw Period 7, the Promoter will randomly draw thirty (30) Entrants from all valid entries registered for that Draw Period.
All drawn Entrants will be called during the live broadcast of The Today Show on Channel 9 on the dates stipulated in Table A for their chance to win. The Promoter will call the randomly drawn entries, in the order they were drawn and recorded, and via their fixed line telephone and/or mobile telephone number from which their entry was originally received. In the event that within their entry, the Entrant stipulates a different number from which their entry was originally received, this number will be used to call the Entrant. In the event an Entrant leaves both a mobile number and a landline number in their entry, the Promoter will call the mobile number if the Entrant is drawn. Entrants must satisfy the “Valid Winner Determination”.
For each Draw Periods there will be one (1) call per live broadcast of The Today Show (subject to the below). In the case of Draw Period 7, in the event that the first (1st) call in this period is not a valid winner in accordance with the Valid Winner Requirements, then the Promoter will call the remaining twenty nine (29) Entrants in the order they were drawn, until the call is answered and recorded to ensure that any remaining monies are awarded. In the event this process does not result in all prize monies being awarded, they will be awarded in the unclaimed prize draw.
If a representative of the Entrant answers the fixed line telephone and/or mobile telephone number from which the entry was originally received, and fulfils the Valid Winner Requirements, that representative has the right to win on behalf of, and subject to the agreement of, the Entrant as deemed suitable by the Promoter in its absolute discretion. In this event, the representative will be taken to be the Winner of the relevant Draw Period. If the Entrant does not agree to his/her representative winning the prize on the Entrant’s behalf, that prize will be forfeited in whole and no substitute or compensation will be offered to the Entrant or their

representative.
The final decision in determining whether or not an Entrant has answered the phone in a manner that satisfies the Valid Winner Requirements, will remain at all times with the Promoter and will be determined by the Executive Producer of The Today Show or their nominated representative on the day. No correspondence will be entered into. The Promoter advises that entrants must take care in preparing to answer their call correctly (including but not limited to ensuring that the Entrant’s phone is close within reach at all times). For the removal of doubt, the Promoter is neither responsible nor liable for any loss or damage suffered in the event that the Entrant is unable to correctly answer the call as required.
If the Entrant does not satisfy the Valid Winner Requirements, that entrant will not be a valid winner. In this case, the prize that was available for the relevant Draw Period will be forfeited and will go into the next prize pool for the next drawn Entrant. An Entrant who forfeits a prize under this clause will not be offered any substitute or compensation.
In the event that any broadcasts of The Today Show are changed, delayed or cancelled for any reason, the winner announcements that were scheduled for that broadcast will be carried out in the next show broadcasted on the next business day.
The Promoter and/or the program producer reserve the right to terminate any entrant’s call if, in their sole discretion, they believe that the Entrant is being in any way impolite, abusive or offensive and to prohibit any such Entrant from future entry to the promotion during the entire Promotional Period. Any such Entrant’s entries in the promotion will also be deemed invalid.
Permit numbers
ACT: TP 20/00153, NSW: LTPS/20/41841, SA: T20/139.

View All Competitions From 9now.nine.com.au