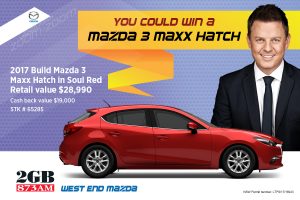 5. Entry and Draw
Procedure
● at least 18 years of age;
● residents of New South Wales;
● hold a current Driver’s License;
● present at the Prize Draw Location at the Prize Draw Time;
Entrants must not be employees, or immediate family members, of:
● Macquarie Media Operations and its related bodies corporate; or
● West End Mazda
● Agencies associated with this promotion

To be entered into the Promotion, Entrants must, during the Promotional Period:
● Attend West End Mazda Blacktown, 106 Sunnyholt Rd, Blacktown, NSW 2148;
● Complete the electronic entry form via iPad on location at West End Mazda, which will require Entrants to
provide their full name, address, drivers licence number and other identifying information. The Winner of the Prize will be drawn using the following process:
● All entries received via iPad at the Prize Draw Location during the Promotional Period will be printed onto paper and put into a barrel;
● One entry will be chosen from the barrel at random ( Drawn Entry ) by the Promoter, or a nominated person by the Promoter between 17:00 (AEST) and 18:00 (AEST) during Ben Fordham – Sydney Live program on Friday, September 8, 2017, as 2GB 873 radio broadcasts live from West End Mazda Blacktown, 106 Sunnyholt Road, Blacktown, NSW, 2148;
● The name of the Entrant on the Drawn Entry will immediately be announced live on air;
● From the time that the name on the Drawn Entry is announced live on air, there will be a four (4)
minute waiting period during which the Entrant must present themselves in person to the Promoter
at the Prize Draw Location to claim the Prize.
● If the named Entrant does not claim the Prize in person within the four (4) minute period, they are
ineligible to win the Prize and their entry will be discarded.
● The Promoter will execute a redraw of another entry from the barrel, using the same process
described above, waiting four (4) minutes for the next named entrant to present themselves, until a winner is found.
Entrants must be present at West End Mazda Blacktown, 106 Sunnyholt Road, Blacktown, NSW, 2148, at the time of the Draw to claim the Prize (Entrants cannot nominate a proxy to attend on their behalf).
Maximum of one entry per Entrant
Entrants who submit more than one entry may be disqualified.
6. Maximum Entries per
person
Date:
Close Friday, September 8, 2017
Date:
Entrants must be:
08:30 (AEDT)
15:00 (AEDT)
7. Prize Draw Time and
Location
8. Prize Provider
9. Prize(s)
10. Prize Restrictions
Prize Draw Date: Friday September 8, 2017
Prize Draw Time: Between 16:00 (AEDT) and 18:00 (AEDT)
Prize Draw Location: West End Mazda Blacktown, 106 Sunnyholt Rd, Blacktown, NSW 2148 West End Mazda Blacktown, 106 Sunnyholt Rd, Blacktown, NSW 2148
There will be one winner of the Prize: 2017 Build Mazda 3 Maxx Hatch Colour: Soul Red
Mazda Stock Number: 65285
Retail Value: $28,990 drive away
The total prize value is $28,990 and includes: on-road costs, stamp duty, registration and green slip.
Prize Collection: The Winner can elect to collect the Prize in one of the following ways:
● Drive away with the Prize from the Prize Provider; or
● Collect the Prize at a later date as organised with the Prize Provider.
● The winner may, in his or her absolute discretion, elect to receive the Cash Back Value as the Prize instead of the Prize car. The Cash back value is $19,000.
● The winner acknowledge that if they elect the Cash Back Value, they will not be entitled to the difference in value between the Cash Back Value and the Retail Value of the car. Payment of the Cash Back Value will be by cheque or electronic funds transfer from the Prize Provider within three (3) weeks of the Notification of Winner.
The Winner’s name and suburbs will be announced on air on the Draw Date on the Ben Fordham – Sydney Live program on 2GB 873 between 16:00 (AEDT) and 18:00 (AEDT) on Friday September 8, 2017, at West End Mazda Blacktown, 106 Sunnyholt Rd, Blacktown, NSW 2148.
The Winner’s name and suburb will also be published on 2gb.com
The Winner’s name and suburb may also appear on the website and in any promotional materials prepared by
the Promoter or by West End Mazda.
a. By entering the Promotion, the Entrant accepts these terms and conditions and agrees to the Promoter’s Privacy Policy ( http://www.2gb.com/privacy-policy ), each as amended from time to time and available on the Promoter’s website.
b. Participants consent to their personal information (as that term is defined in the Privacy Act 1988) being used for direct marketing by the Promoter and Prize Provider, distribution by the Promoter and uses approved in the Privacy Policy.
c. The Promoter may extend the Promotion Period in its absolute discretion.
d. Throughout the Promotional Period the Promoter may contact Entrants to interact with the station on air
/ online / in social media in relation to the Promotion.
e. Entrants may be required by the Promoter and Prize Provider to participate in photo, recording, video and
film session(s) and acknowledge that they assign, by way of present assignment of future copyright, the right to use such publicity materials in any medium (including, without limitation, the internet) and in any reasonable manner it sees fit.
f. It is a condition of Entry that the Promoter and Prize Provider have the right to publicise, broadcast and communicate to the public the names, characters, likenesses or voices of Entrants for any promotion or matter incidental to the Promotion. By agreeing to enter, all Entrants consent to their Entry broadcast on air and to their telephone and other conversations with the Promoter and Prize Provider being broadcast on air and communicated to the public on via any medium. Entrants will not be compensated for this use.
g. The Promoter and its representatives may conduct security and verification checks in their absolute discretion to determine the Entrant’s eligibility to enter the Promotion.
h. If an Entrant be deemed by the Promoter to be ineligible, the Entrant may not participate further in the Promotion.
i. All decisions are at the discretion of the Promoter and no discussion or correspondence will be entered
11. Notification of Winners
12. Additional Terms

into in this regard.
j. The Promoter is not responsible for any problems or technical malfunction of any network or lines,
computer online systems, communication network, computer equipment, software, technical problems or traffic congestion online, including any error, omission, alteration, tampering, deletion, theft, destruction, transmission interruption, communications failure or otherwise preventing entrants from successfully participating in the Promotion.
k. If the Promotion is not capable of being conducted due to circumstances beyond the Promoter’s control, including due to any technical or communications problems, the Promoter reserves the right to amend, suspend or cancel the Promotion subject to approval from any relevant authority.
l. Prize(s) will be awarded as specified in the Prize details. If a Prize is unavailable for any reason, the Promoter, at its discretion, may substitute it for another item of equal or higher value. The Prize is subject to any Prize Restrictions specified above. All Prize values stated are the recommended retail value as provided by the supplier, are in Australian dollars and are correct at the time of preparation of these terms and conditions.
m. All Prizes and parts of the Prize are subject to availability, non-transferable and non-exchangeable, must be used on any dates specified in these terms and conditions and as stipulated by the Prize Provider and are not redeemable for cash unless cash is specified. The Promoter and Prize Provider will not be responsible or liable if for any reason beyond their reasonable control any element of any Prize is not provided. The Promoter will not be liable for any damage to or delay in transit of Prizes, or for any compensation in relation to those Prizes.
n. A winner has rights under the Australian Consumer Law and other similar legislation which cannot be excluded, restricted or modified by the Promoter. These rights include a statutory guarantee that any services provided by the Promoter will be rendered with due care and skill and that any goods will be of acceptable quality. These Conditions of Entry do not exclude, restrict or modify those statutory rights in any way. However, to the extent it is permitted by law to do so, the Promoter makes no representations or warranties, express or implied, other than the Australian Consumer Law, regarding the quality and suitability of the Prize awarded under these conditions of entry and will not be responsible for breach of any such implied terms.
o. The Promoter and its agencies and representatives associated with this Promotion, including any Prize Provider, will not be liable for any loss (including but not limited to indirect or consequential loss), damage or personal injury which is suffered or sustained (including without limitation to that caused by any person’s negligence) relating to this Promotion or the awarding or taking of the Prizes except for any liability which cannot be excluded by law (in which case liability is limited to the minimum amount allowable by law).
p. The Entrant acknowledges that there may be inherent risks involved in entering the Promotion or taking or participating in the Prize(s), for which the Promoter accepts no responsibility. If Entry or a Prize involves travel, stunts or challenges the Promoter may, at its discretion, require the participants to:
– Submit to a medical examination by a medical practitioner approved by the Promoter and obtain relevant medical clearance to participate in the Promotion and redeem a Prize; and
– Execute a Deed of Release and Indemnity in a form prescribed by the Promoter in order to participate further in the Promotion and redeem a Prize.
q. The Promoter and Prize Provider accept no responsibility for any tax implications that may arise from winning of the prizes. Independent financial advice should be sought.
r. The Promoter takes no responsibility for variations in the Prize value. The Prize value is correct at the time of applying for the competition permit but no responsibility is accepted for any variation in the value of any Prizes due to a change in the market value or otherwise.