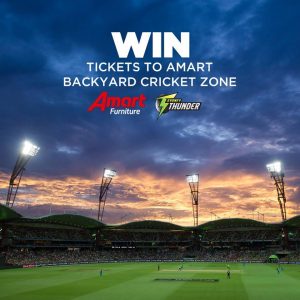 1. Information on how to enter and Prize details form part of these conditions. Entry into this Promotion is deemed acceptance of these terms and conditions of entry.

4. The second promotion for the Sydney Thunder match on 1st January 2018 will be open from 10am Australian Eastern Standard Time (“AEST”) on Wednesday, 20th December 2017 and will continue until 11.59pm AEST on Tuesday, 26th December 2017 (“Promotion Period”).

5. The third promotion for the Sydney Thunder match on 7th January 2018 will be open from 10am Australian Eastern Standard Time (“AEST”) on Wednesday, 27th December 2017 and will continue until 11.59pm AEST on Tuesday, 2nd January 2017 (“Promotion Period”).

6. The fourth promotion for the Sydney Thunder match on 11th January 2018 will be open from 10am Australian Eastern Standard Time (“AEST”) on Wednesday, 3rd January 2018 and will continue until 11.59pm AEST on Monday, 8th January 2018 (“Promotion Period”).

8. Entry is open to all New South Wales residents, aged 18 years and over, other than management, employees or contractors of the Promoter and other agencies, firms or companies associated with the Promotion (including suppliers of prizes), and their immediate families (“Eligible Entrants”).

9. To enter and be eligible to win, Eligible Entrants must:

a) Follow Amart Furniture
b) Post 25 words or less why you and your 5 friends would want to sit in the Amart Furniture Backyard Cricket zone to cheer on Sydney Thunder.

Completion of the relevant steps described above is an “Eligible Entry”.

10. Eligible Entrants may enter multiple times but once per day. Multiple entries made in a single day will be invalid.

11. Judging of all Eligible Entries received during each Promotion Period will take place and be announced on the following dates:

12. The first Eligible Entrants drawn at as determined by the judge in their sole discretion, will win tickets for them and 5 friends in the Amart Furniture ‘Backyard Cricket Zone’ (total 6 tickets) to the nominated Sydney Thunder Big Bash League game, catering and maximum of 5 drinks per guests with the total prize pool valued at $1,500 per promotion.

13. Transportation to and from the events is not included.

14. In the event that the Prize is unclaimed by 12pm AEST on the work day prior to each event, it will be distributed at the Promoter’s absolute discretion. Redraws will occur on the following dates:

15. The Promoter’s decision (including any decisions as to prize distribution) is final and no correspondence regarding the result will be entered into.

16. Entrants agree to receive separate communications from Amart Furniture and the promoters. Entrant details will never be made available to any other parties. Communications will contain an opt-out option.

18. The Prize is not transferable or exchangeable and is not redeemable for cash.

19. The Prize winner may be required to sign a release and indemnity form in favour of the Promoter and return that document to the Promoter prior to receiving the Prize.

20. The Promoter shall not be liable for any Prize that may be lost, stolen, forged, damaged or tampered with in any way after it leaves the Promoter.

21. The Promoter accepts no responsibility for any variation in the value of a Prize.

22. If the Promoter is unable to provide a finalist or winner with the nominated Prize, the Promoter reserves the right to supply an alternative Prize of equal or greater monetary value, subject to written directions by the relevant State and Territory gaming departments.

23. If a winner chooses not to take their Prize (or is unable to), they forfeit the Prize and the Promoter is not obliged to substitute the Prize.

24. The Promoter excludes all warranties in relation to supply of the Prize, except those that cannot be excluded by law. To the fullest extent permitted by law, any liability of the Promoter or its employees or agents for breach of any rights a consumer may have which are unable to be excluded under Australian law, is limited to the payment of the costs of having the Prize supplied again.

25. The Promoter accepts no responsibility for any entries not received for any reason during the Promotion Period. Entries will be deemed to be accepted at the time of receipt by the Promoter.

26. The judges’ decision is final and binding and no correspondence will be entered into. Incomplete, illegible and incorrect entries or entries containing offensive or defamatory comments, or which breach any law or infringe any third party rights, including intellectual property rights, are not eligible to win.

27. If, for any reason, the Promotion is not capable of running as planned, including due to infection by computer virus, bugs, tampering, unauthorised intervention, fraud, technical failure or any other causes beyond the control of the Promoter, which corrupt or affect the administration, security, fairness, integrity or proper conduct of this Promotion, the Promoter reserves the right in its sole discretion to take any action that may be available, subject to State and Territory regulations.

28. Any Eligible Entrant who, in the opinion of the Promoter, tampers or interferes with the entry mechanism in any way, or who does not properly comply with the entry process, will be ineligible to win.

29. The Promoter reserves the right to disqualify entries in the event of non-compliance with these terms and conditions of entry. In the event there is a dispute concerning the conduct of the Promotion, the decision of the Promoter is final and binding on each entrant and no correspondence will be entered into.

32. This Promotion is a game of skill.

33. To the extent permitted by law, the Promoter shall not be liable for any loss or damage whatsoever (including but not limited to direct or consequential loss) or personal injury suffered or sustained in connection with this Promotion.