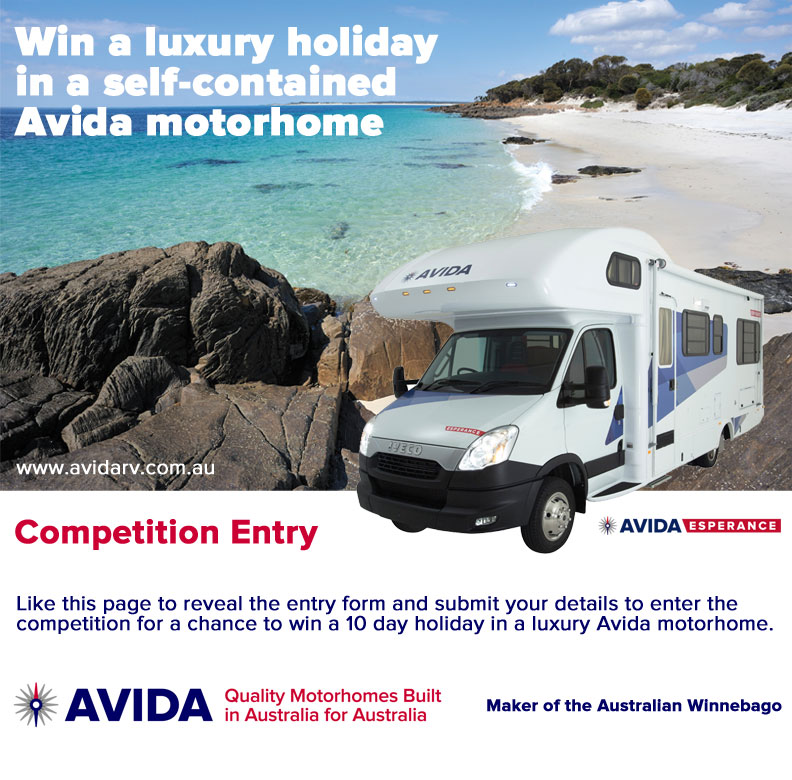 Fill in your details and answer the question correctly for a chance to win a 10 day motorhome holiday adventure in a luxury Avida motorhome!

Why would you like to win this holiday in an Avida (25 words or less)?

Information on how to enter and prizes form part of the terms and conditions of entry.

All entries are only via direct data entry into www.avidarv.com.au.
Entry is open to Australian & New Zealand residents aged 18 years or over. Employees of the Promoter and their immediate families, companies, participating outlets and their agencies associated with this promotion are ineligible to enter.

This is a game of skill and chance plays no part in determining the winners. Judges’ decision is final and no correspondence will be entered into.

The winners will be notified by phone and a subsequent letter detailing the prize collection process sent.

Other associated costs such as food, caravan park fees, and excess fuel is at the expense of the prize winner.

Driver of the Avida luxury motorhome must be 30 years old or over and hold a current standard Australian or New Zealand driver’s license for two years or more.

Prizes are non-transferable and not redeemable for cash. The winner must abide by the competitions terms and conditions.

The major prize winners must nominate a series of dates and the promoter will try to accommodate their first or second choice. The prize must be taken within 9 months of notification but the period from December 15, 2014 to January 15, 2015 is not available to select.

The Promoter shall not be liable for any loss or damage whatsoever which is suffered (including but not limited to indirect or consequential loss) or for personal injury which is suffered or sustained, as a result of taking the prize, except for any liability which cannot be excluded by law.

The major prize winners acknowledge that they have been warned that there is a possibility of an accident causing injury, death or property damage in accepting the prize.

The Promoter reserves the right to request winners to provide proof of identity and current driver’s licence details on acceptance of prize. Identification considered suitable for verification is at the discretion of the promoter.

The promoter reserves the right in its sole discretion to disqualify any individual who appears to have tampered with the entry process, including unauthorised intervention, fraud, technical securities, administration securities, fairness, integrity or proper conduct of the promotion.

Prize values are the recommended retail value as provided by the supplier and are correct at time of printing. All prize values are in Australian dollars.

Prize winners are advised that Tax implications may arise from their prize winnings and they should seek independent financial advice prior to the acceptance of the prize.

The promoter reserves the right to refuse to allow a winner to take part in any or all aspects of the prize, if the promoter determines, in their absolute discretion, that a winner is not in the mental or physical condition necessary to be able to safely participate in the prize.

It is a condition of accepting the prize that the winner may be required to sign a legal release in a form determined by the promoter in its absolute discretion.

All entries become the property of the promoter and the promoter may use the winners’ names, addresses and telephone numbers for future promotional, marketing and publicity purposes in any media worldwide without notice and without any fee being paid unless otherwise advised by the entrant.