To enter, individuals must complete the following steps during the Promotional Period:

(a) Take an original photo of a sunset (the photo must not contain images of persons under the age of 25 years old);
(b) Go to the Aperol Facebook Page at www.facebook.com/AperitivoHourAustralia ;
(c) ‘like’ the Aperol Facebook Page (if not done so already);
(d) follow the prompts to the promotion application, input the requested details including their full name, date of birth and address;
(e) Upload the sunset photo taken in accordance with clause 5(a);
(f) Answer the question “Tell us about your perfect summer sunset?” in 25 words or less;
(g) Agree to the Terms and Conditions by selecting the relevant tick box; and
(h) Submit the fully completed entry form.

Uploaded photo files must be submitted in JPEG or PNG format and must not exceed 3MB file size. Images larger than 1000 pixels wide or tall will be resized to fit inside that box, while still keeping the original aspect ratio.

Major Prize: The best valid entry, as determined by the judges, will win the Major Prize. The Major Prize is a trip for two (2) people to Italy and consists of the following:

The Major Prize is valued at up to AU$11,327.32, depending on date and point of departure.

Additional spending money, meals, taxes (excluding airline and airport taxes), additional insurance, passports, visas, vaccinations, transport to and from departure point, additional transfers, items of a personal nature, in-room charges and all other ancillary costs are not included. Prize must be taken between 15 April 2014 and 15 April 2015 and is subject to booking and flight availability. Prize cannot be taken during the following blackout periods: 8 April 2014 – 24 April 2014 and 10 September 2014 – 25 September 2014. Prize may also not be taken during Australian school holidays, public holidays or other peak periods, unless otherwise permitted by the Promoter. 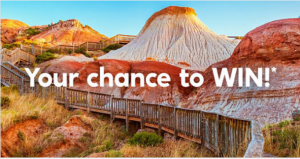