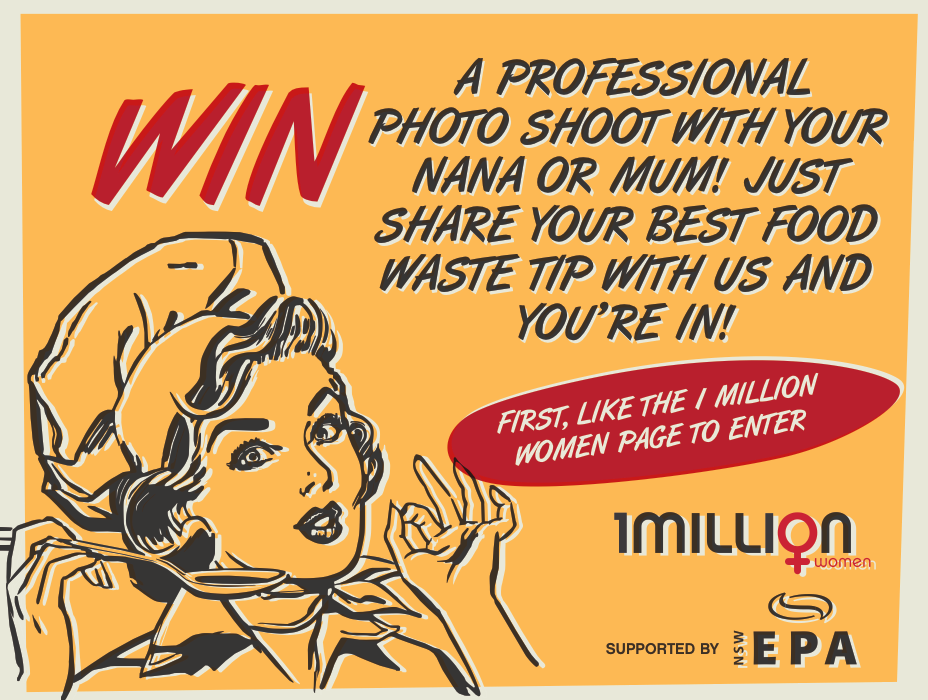 Tell us a tip or recipe you’ve learnt from her OR upload a pic of the two of you and you’re in!

You’ll be in the running to win a professional photo shoot for the two of you with one of Australia’s leading photographers (including hair and makeup for the shoot, lunch and transport costs). A memory to last a lifetime!

1. Information on how to enter forms part of the terms of entry. Entry into the competition is deemed acceptance of these terms and conditions. The winner is determined by a judge.
2. Entry is open to all residents of Australia. However, employees and their immediate families of 1 Million Women and their associated agencies and companies are not eligible to enter.
3. The competition commences on April 11th 2014 at 00.05 (AEDST) and concludes on May 13th 2014 at 13:59 (AEDST).
4. To enter, participants are to respond to a Facebook promotion where they need to ‘Like’ the 1 Million Women’s Facebook Page to unlock the entry form and register their details including (but not limited to) name, post code, e-mail address, a tip or recipe from their nan (or older wise lady) or upload a photo.
5. Entrants under the age of 18 must obtain the permission of a parent or guardian over the age of 18 to accept the prize should they win.
6. Entrants (including winners) in the competition may only enter once during the course of the promotion.
7. The Promoter reserves the right to request winners to provide proof of identity, proof of residency at the nominated prize delivery address and/or proof of entry validity in order to claim a prize. Proof of identification, residency and entry considered suitable for verification is at the discretion of the Promoter. In the event that a winner cannot provide suitable proof, the winner will forfeit the prize in whole and no substitute will be offered.
8. The Promoter reserves the right to verify the validity of entries and to disqualify any entry which, in the opinion of Promoter, includes objectionable content, profanity, potentially insulting, inflammatory or defamatory statements, disqualify any entrant who tampers with the entry process, who submits an entry that is not in accordance with these Terms & Conditions of Entry or who has, in the opinion of Promoter, engaged in conduct in entering the Promotion which is fraudulent, misleading, deceptive or generally damaging to the goodwill or reputation of the Promotion and/or Promoter. The Promoter reserves the right to disqualify a winner if Promoter becomes aware that the winner and/or the winner’s entry is of a type described in this clause.
9. One prize winner will be announced each week. Entries for the first week winner must be received by 13:59 (AEDST) on April 18th 2014 to be valid for entry into the first week judging. Entries for the 2nd week winner must be received by 13:59 (AEDST) on April 25th 2014 to be valid for entry into the second week judging. Entries for the third week winner must be received by 13:59 (AEDST) on 2nd May 204 to be valid for entry into the third week judging. Entries for the fourth week 2x winners must be received by 13:59 (AEDST) on 12th May 2014 to be valid for entry into the fourth week judging. The time of entry will in each case be the time the entry is received by the website database. The Promoter accepts no responsibility for any late, lost or misdirected entries not received by the Promoter or delays in the delivery due to technical disruptions, network congestion or for any other reason.